Mesmerized by the flickering embers, causing near unbearable heat as it radiated through

This time he was truly ready. He could feel the accusing stare of the man that had come to

see him a few days after that night. He’d sat there, glowering, not uttering a word. Getting up, he

placed a hand on his shoulder.

“That was too disorganized. You let her get to you. You must do what was discussed,

otherwise there’s no point in all of this. There is no need for unnecessary violence. Savagery is

not part of this. It will bring unwanted attention, and emotion.”

At that, he left the room. His steaming mug of tea untouched, as if his brew was not worthy

doing this. But he needed their support. He had to have the assurance that he would never be

discovered, that they’d never betray him.

Carefully putting on his long, black trench coat and top-hat, winking at his reflection. His

anger had diminished. He was ready.

Venturing out into the bone-numbing cold, keeping his hands tightly tucked into his coat.

a blackened mass of soot settling on everything in sight. This whole city was going to hell.

Leaving the decent streets where he rented his latest studio, he slowly made his way into the

When he and his family settled in England in 1868, the place was already filling with

immigrants. But over 4.5 million invaded the country; causing depression, riots and protests—

He didn’t bother with these things, he was too busy acting and painting to worry about the

trivial matters of the lower class. They deserved to be where they were, they weren’t smart

enough to make it.

Rain drizzled its final good-bye, the wet mustiness settling in its place, the cobbled streets

grasp, the fog shrouded him in a fine mist, so they could only see him when he pounced.

Walking along Buck’s Row, the feeble gas lamps lit a ghostly silhouette as he passed the

His body tensed in anticipation. A woman stumbled toward him. A rather plumb woman, on

closer inspection her brown eyes were barely noticed in that fleshy grotesque face. Her lanky

He knew what she’d been doing. He recognized her from his many visits to this part. Her

cursing and drunkenness always caused him to veer to the opposite direction. But not tonight,

tonight he headed straight for her. Leaning against a bench, she tried to straighten her brown

Linsey frock, no doubt ruffled from her recent sexual encounter.

Breathing heavily, she seemed to purposefully bump into him as she walked past, completely

unaware of who he was.

Clenching his jaw, he wanted to wring her neck. See her eyes bulge, enjoy watching her beg

for her life. These women that ignored him infuriated him more than he could have imagined. He

would never have intercourse with them, but for them to completely ignore him only sealed their

Not bothering to hide his presence, he turned and followed her. Staggering in her usual

drunken manner, holding onto the large iron gate, again trying to get a hold of herself.

Swiftly producing his dagger, relishing the power it allowed him. Not giving her a chance to

speak, yanking back her head, trying to slice his knife across her throat. He did not expect the

struggle she put up. Twisting her head away from him, she tried to pull free. But he held firm.

Holding tightly to her jaw, wrenching her head around, violently slicing his knife across. Her

body instantly collapsed to the ground.

Gagging, he stared transfixed at the sight of her nearly decapitated head, lolling from the

severed ligaments that barely held them together. He instantly grew aroused. The unexpected

struggle only fueling his need.

A low gurgling sound resounded deep in her throat. Her severed windpipe struggled to give

her air, lying there aspirating on her own blood.

he set about completing his master piece.

At 3:40am, Charles Cross whistled as he strolled to work. A dark shape could just be made

out leaning against the gates. Cautiously approaching the unmoving shape, he realized it was a

woman, her head facing east. Swiveling around to the sound of approaching footsteps, heart

beating, terrified that whoever had done this had come back.

Robert Paul, another car man headed in his direction.

Robert didn’t know how to react at the sight. It seemed almost surreal. The head seeming to

be unattached to her neck. Approaching and crouching down, he placed a hand on her breast.

“I think I felt movement.” He whispered. “‘I believe she’s still breathing.’”

Looking at her disarrayed clothes, her skirt raised above her hips, he thought he knew what

had happened that night.

Hastily they covered her, not noticing a pool of dark liquid, racing to find the nearest

Constable John Neil happened to be passing by, noticing the woman lying there. Alerting

other Bobbies in the area, he couldn’t help but stare at the ghastly scene. Abdomen cut deeply,

intestines laid out for inspection. Designed to shock, a premeditated act that he would never

Only later did the police and doctor realize the full extent of her injuries. The one jagged

Her genitals disfigured, no way of knowing if she was assaulted pre-mortem.

Later this victim was identified as Mary Ann Nichols 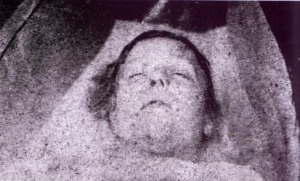 Sharlene Almond is the author of the genre-bending Annabella Cordova series, and a New Zealand travel book Journey in little Paradise. She has written a range of health, writing and body language articles; contributing as a guest writer on other blogs. Over the last ten years, Sharlene has attained qualifications in Body Language, Criminology, Journalism, Editing, Cognitive Behavioural Therapy, Pet Care, and Animal Behaviour. While setting up an online nutritional business, she is studying to specialize in Medicinal Cannabis and Post Traumatic Stress Disorder. Sharlene is also currently editing her second Annabella Cordova novel, with two others in the works. To support her online business, Sharlene sends out a trimonthly newsletter covering health, body language, writing, and even articles centered on health topics for your pet. View more posts