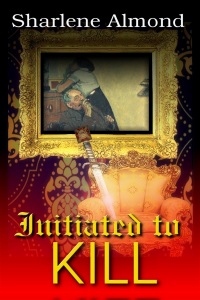 My novels explore the deprived psyche of two serial killers – both past and present, and how both of them are connected to each other.

Initiated to Kill has two parts to it. The first part is based in 2016, Seville, Spain. Annabella becomes involved in the case when she reports her roommate missing. The police only start taking it seriously when every week another girl disappears, and six days later a package arrives at the front desk of the police station. In that package sparks a major manhunt. This brings in Andres Valero, a tormented detective returning from leave because of an attack on his fiancée, and subsequent handling of that case.

When Andres Valero, and his partner Riveria go to talk with Annabella, they soon discover her unique skills of reading people. Not just their body language, but when someone could be lying.

Reluctant to at first bring Annabella in. Andres soon concedes, as panic starts to spread about these girls’ disappearances.

Their case brings them into contact with Seville University, a conspiracy thought to have been forgotten about, and a man bent on getting what he desires most of all.

Throughout the book, I take the reader back in time to 19th century Whitechapel, London. And to a man that is considered one of the most infamous serial killers – Jack the Ripper.

But this plot isn’t just another tale about his crimes, but the man that could possibly have been Jack the Ripper. The narcissistic child that grows into a talented, but sadistic artist, strolling the sordid streets of Whitechapel looking for his next masterpiece.

Although, some may liken my conspiracy theory and symbology to Dan Brown, I would like to think my novel stands apart from his in the way I represent the conspiracy, and how the Jack the Ripper crimes could have been a part of this conspiracy.

Both the present-day and historical part of the novel all go back in time to the main character’s lives. Instead of just talking about what happened to them, and their background; I have set a stage, created the chapters to enable the readers to get a detailed picture and understanding of the main characters.

You can also view my novel’s first 60 pages in flip cover at the below link: